Rounding out the field for the recent ISC’14 Student Cluster Competition in Leipzig are two semi-experienced teams that both have “South” in their names. Though separated by large amounts of land and water, Team South Africa and Team South Korea do have some things in common.

Both have minimal experience. For the South Koreans, this is only their second international competition, coming quickly on the heels of their debut at last spring’s ASC14 tourney. Team South Africa is even less experienced, since the team is composed of students whose only experience is an intra-country cluster competition last December.

Here’s a closer look at the teams…

Team South Korea hails from Ulsan National Institute of Science & Technology (UNIST) – a very sensible name, given their location in Ulsan, South Korea. Only seven years old, it’s by far the youngest school in the competition.

As noted above, this is the same UNIST team that successfully competed in Guangzhou, China last spring. However, they brought significantly more, and different, gear to this year’s ISC competition. In Guangzhou, they were driving a six-node cluster with six NVIDIA Titan GPUs (yeah, Titans, not Tesla cards).

But in Leipzig this year, they’ve bumped their cluster up to eight nodes and trimmed it out with eight NVIDIA K40c Tesla GPUs. This should give them better results all the way around. They also decided to supersize their memory, moving from the 768 GB they used in China to a much more robust 1.4 TB in Germany.

In the video, we talk to the team and exchange pleasantries about the competition. They don’t talk an awful lot in the vid, but as I discovered in Guangzhou, they’re a fun bunch to be around in a bar setting. 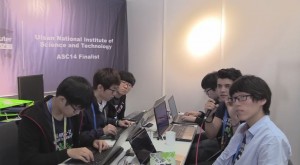 Team South Africa is facing a near-impossible mission at ISC’14. They came out of nowhere last year and took home the Overall Championship award at ISC’13 – which shocked and electrified cluster competition insiders and ardent fans alike.

It’s difficult to repeat as a cluster competition champion in any of the major competitions. Only two teams have ever accomplished this feat: Taiwan’s NTSU (SC10, SC11) and the University of Texas, Austin Longhorns at SC12 and SC13.

South Africa’s chances at a repeat are even less likely when you factor in the guidelines used to create their international competition teams. Students get to participate in the big show only once. This means that the students who were on the championship team last year can’t be on the competition team this year. In this way, the South African CHPC (Centre for High Performance Computing) can get as many students participating in these competitions as possible.

To select which students will represent the country at the ISC championship, the CHPC holds their own cluster competition at their annual meeting in December. (I attended the meeting in Cape Town last December and will publish coverage of their competition – I finally recovered the footage!)

So every year, the kids South Africa sends into the cluster competition fray are newbies who haven’t competed at this level before. In the video, you’ll see that these kids are very engaging and can hold up their end of an interview. They also know their way around a supercomputer and HPC apps. But are they good enough to win the whole thing a second time? That’s the big question… 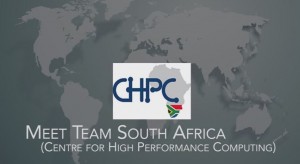