Two student teams from the United States traveled to the ISC’14 Student Cluster Competition in Leipzig, Germany to defend the red, white, and blue, and  perhaps bring the ISC cluster Chalice of Victory to the U.S. for the first time. (There isn’t an actual ‘Chalice of Victory’.)

University of Colorado Boulder: ISC’14 marks the record-breaking eighth time Colorado has competed in a major international student cluster competition. Only Purdue, with seven majors, is even close.

It’s a familiar team, with plenty of returning veterans. But they have an entirely different approach this year. Colorado was one of the last teams to embrace accelerators, biding their time to see whether the rush to GPUs and Phis was merited or just a flash in the pan.

In the last couple of competitions, the Buffaloes have dipped their toes into the hybrid HPC waters with mixed results. But this year they’ve gone all in, sporting a smallish four-node configuration backed by eight beefy Intel Phi co-processor accelerators.

However, the team is only using three nodes for the competitive runs. They were forced to disable one node in order to stay under the power envelope. In the video, we kick around the merits of where to stay in Leipzig, do some system talk, and discuss how their apps runs are going.

Team Boston is known by many names including Team Mass Green, Team Chowder, and Team Beantown. While this is their first ISC appearance, various elements of this team have competed in four previous SC competitions.

The team this year is composed of students from Bentley University, Northeastern University, and MIT. Readers who follow student clustering closely will remember that the Bentley and Northeastern components of this team won the SC13 Commodity Track competition last November in Denver.

Boston’s approach at ISC’14 is innovative, as you’ll see in the video below (which is suitably accompanied by a Boston-like sound track.) 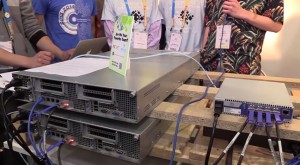 Rather than go after the Kluster Kup with the typical 8-10 node rack of two-way servers, they’re trying something we haven’t seen in a competition to date. They’re using a set of four quad-socket ‘fat nodes’ in an attempt to end-run around the rest of the pack.

From a total CPU core standpoint, these nodes aren’t just fat; they’re obese, with 64 AMD Opteron cores per node (256 total for the cluster). While they have more CPU cores than anyone else, they look to be on a memory diet, with just 640GB total for the entire cluster. But, as the old saying goes, it’s not the size of your RAM that matters; it’s how you use it (I hope).