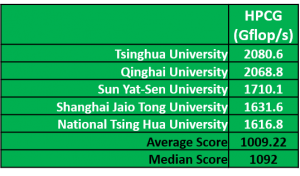 When it comes to HPC benchmarks, very few are tougher on the hardware than HPCG. Designed to complement HPL (LINPACK), HPCG much more closely mimics today’s real-world workloads. Together, HPL and HPCG are sort of bookmarks in system performance:  HPL will show off the best that the system can do while HPCG yields the worst case scenario.

The ASC18 Student Cluster Competition competitors turned in some very solid results for HPCG. Tsinghua University set a new record for HPCG with their score of 2,080.60 GFlop/s, topping the SC17 record of 2,055.85 set by Nanyang University.

Qinghua University was a very close second, notching a score of 2,068.80. The rest of the field was left in the dust of the two front runners.

In HPCG, Tsinghua’s six nodes and 16 NVIDIA V100s really hit their stride. What Tsinghua couldn’t do on LINPACK, they did in spades on HPCG. Qinghua continued to surprise with their second place finish in both HPCG and LINPACK. 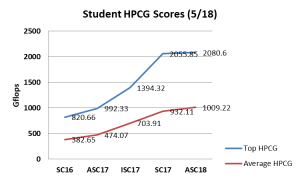 Looking back at HPCG history, we see that both Tsinghua and Qinghua topped the SC17 HPCG record, but by only a small margin.

Diving a little bit deeper, the average HPCG at the most recent cluster competition (SC17) was 932.11 GFlop/s while the average score at ASC18 was 1,009.22, a modest increase.

It will be interesting to see if anyone at ISC18 can match or beat the HPCG and LINPACK scores from ASC18. There are only six weeks separating the events and without any big hardware advances, we shouldn’t expect to see significantly higher scores. However, it’s possible that an ISC18 team might bring some liquid cooled gear and, along with a lust for optimizing benchmarks, set new records in one or both.