It was an exciting week at ASC18 in Nanyang, China. The student teams braved extreme heat, extremely difficult applications, and extreme competition in order to cross the cluster competition finish line.

The gala awards ceremony took place on Wednesday. The auditorium was packed with student teams, various dignitaries, the media, and other interested parties. So what happened?

Tsinghua was crowned as the ASC18 Overall Champion for the fourth time. Their win was based on their record-breaking HPCG score along with their runaway victory on the Siesta Mystery Application. Since the ASC committee doesn’t disclose the scores on all of the applications to us, we really don’t know for sure how Tsinghua crafted their win.

This win is more than just another trophy in the Tsinghua University trophy case. First, there’s the financial reward, a cool 100,000 Chinese Yuan (which translates to about $15,700 US). This win also lands them a coveted slot in the ISC18 Student Cluster Competition, which takes place in mid-June at the International Supercomputing Conference in Frankfurt, Germany.

In a surprise move, first time competitor ShanghaiTech University, grabbed the second place slot, 50,000 Yuan, and also punched their ticket for ISC18 in Germany. Again, we’re not privy to all of the scores at the ASC competitions, so we can only guess why a team finished as they did. While ShanghaiTech won the RELION application, they didn’t finish near the leaders in either of the benchmark tasks. The team must have done pretty well on CFL3D, the AI text recognition app, or in the interview section of the contest.

ShanghaiTech also took home the prestigious e-Prize, an award for achieving extraordinary performance out of their cluster. The ASC hopes to build their e-Prize into a Gordon Bell Prize for college student supercomputing.

The competition wrapped up with a banquet thrown in the students honor at a local hotel. While I’ve seen a lot of things in China and consider myself a somewhat sophisticated traveler, I’ve never seen bigger rotating dining room turntables in my life. It was motorized and built to handle a heavy load. Here are a couple of shots of it. 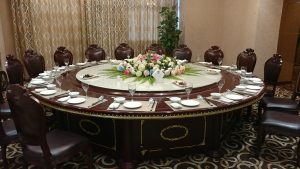 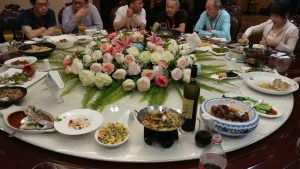 It was at this dinner when I discovered a new taste treat that was invented by the geniuses at Nanchang University. It’s a fermented juice that comes in a 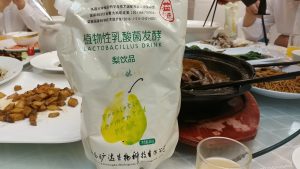 handy pouch. I was particularly partial to the peach and pear flavors. It goes down easy, quenches your thirst, and still has a mild alcohol kick. What more could I want?

Next up on the Student Cluster Competition calendar is the ISC18 competition in Frankfurt. We’ll see a host of international teams, plus Tsinghua and ShanghaiTech. As always, we’ll be covering this competition like spray paint on a new mailbox. So stay tuned….