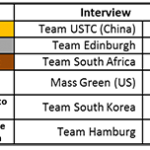 The organizers of the ISC Student Cluster Competitions are a wily bunch. Theirs was the first competition to throw a “Mystery Application” at the student teams, forcing them to optimize an unfamiliar workload on the fly.

The teams only have a few hours to learn the mystery app and figure out how to best deploy it on their clusters. The goal of the organizers is to ensure that the students not only understand the named applications in the competition but also have the skills necessary to install, then optimize a new application.

At ISC14, the competition committee ratcheted up the pressure even more. In addition to the mystery app, which the students expected, there was also a “Secret Mission” task, which, like the Spanish Inquisition, no one expected.

Here’s how it all played out…

The dreaded “Mystery Application” has, in years past, caused a lot of problems for student teams. This app is kept a secret until just before the students have to run it, meaning they don’t have any time to prepare for it.

As far as I can tell, there isn’t a widely available accelerator (GPU or Phi) enabled release of HPCG. That isn’t to say that one doesn’t exist, but I didn’t find it during my research.

All of the teams did pretty well on HPCG – the average score was 66%, the highest of all the competition applications. But the end result was a Teutonic tour de force as the Germans notched a one-two finish, reminiscent of some of the Chinese powerhouse teams in past competitions.

Team Hamburg (University of Hamburg) topped all competitors with an astonishing 100% score, a huge accomplishment for a newbie team. Chemnitz (Chemnitz University of Technology) finished second by only a single percentage point, with South Africa taking the Bronze with 97%.

In addition to the Mystery Application, the organizers threw another wrinkle into the competition this year by giving students a ‘Secret Mission’.

The mission? Turn in a GADGET-3 run that uses the least amount of peak power within a 20 minute time limit.

In a break from cluster competition tradition, the teams could shut down and rejigger their hardware to find the combination of gear that had enough computational power to complete the run in 20 minutes, with the lowest peak electricity usage.

The students were given a couple of hours to consider the problem, reconfigure their hardware, and test. After that, they had one hour to provide the judges with their best GADGET run.

This turned out to be quite the challenge. It was, in fact, the most difficult task in the entire competition, with an average team score of just 22%. From what I could tell, most of the teams depowered their systems a bit too much and didn’t have enough enabled gear to hit the 20 minute time limit for a successful run.

But three teams managed to put together the right combo of gear and tuning to complete this task. Team South Africa (Centre for High Performance Computing) snared their first Gold Medal on this task, dominating the rest of the field with their perfect score.

Team Tsinghua snared silver with 79%, and Shanghai (Shanghai Jiao Tong University) took bronze with 62%. The rest of the field wasn’t able to log a successful run in the allotted time.

This task was a great success in my book, since it really pushed the teams to the limit and forced them to use all of their skills to tackle an out-of-the-box problem. Quite the character builder.

Participating in a cluster competition means that the students spend months before the competition learning how to put together the right HPC cluster for the tasks they’ll be given. They have to be on intimate terms with the applications, knowing what sliders to move to make them run like a pack of scalded weasels. (Which is pretty fast, as it turns out.) 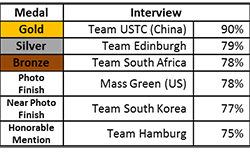 Taking the Gold Medal for best interview is Team USTC (University of Science and Technology of China) with 90% – and that’s despite facing a language barrier (although the competition did provide interpreters for the judges.) Team Edinburgh (The University of Edinburgh/EPCC) edged out the field to snatch up the Silver Medal, even without the benefit of Scottish-English interpretation services.

Team South Africa edged out Massachusetts Green by fractions of a point for the Bronze Medal. As first-time ISC competitors, the teams from South Korea (Ulsan National Institute of Science and Technology) and Hamburg did exceptionally well on the interview portion of the challenge.

In the next article, we’ll lay out the official results for the top three Overall Championship winners along with the winner of the Fan Favorite Award, plus pictures and maybe even some video from the epic awards ceremony.

(For part one of our incredibly comprehensive coverage of the ISC14 cluster competition results, click here.)