Nanyang Technological University, the pride of Singapore, utterly destroyed the Student Cluster Competition LINPACK record by posting a score of 51.77 TFlop/s at SC17 in Denver. The previous record, established by Germany’s Friedrich-Alexander-Universitat (FAU), was 37.05 TFlop/s.

Nanyang used a two node Intel E5-2699 based cluster with a whopping 16 NVIDIA Volta V100 GPUs to take the trophy for Highest LINPACK (although there isn’t an actual trophy). Astonishingly enough, their high score, using only 3,000 watts, is enough to top the most energy efficient systems on the Green500. 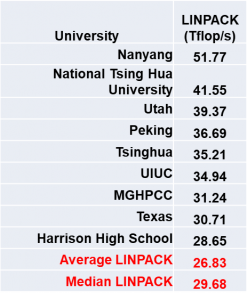 However, the way that Nanyang achieved their score was a bit risky. They powered down their fans for the duration of the (very short) LINPACK run.

The next top finisher was NTHU from Taiwan, another team with a low node count (only three) and a lot of GPUs. Their cluster sported eight V100 and four P100 accelerators for a total of twelve. Peking only has one actual HPC node, augmented with 10 V100s, while Utah brought four nodes and nine V100s.

Tsinghua had a larger cluster with six nodes, but still a heaping helping of eight V100 Tesla accelerators. Keen observers will note that the top three LINPACK finishers all broke the record established at ISC17. Another thing they all have in common is that they’re using loads of NVIDIA V100s to drive their compute power.

I also want to point out that the all high school team, Henry Harrison High, managed to post a score in the top 10. That’s pretty impressive for a team of kids so young and new to the HPC field.

So Nanyang takes home the Highest LINPACK Award, which will probably be in the form of a certificate. I would like to be there when all of the teams try to explain to their parents and grandparents exactly what a “LINPACK” is and how you “pack the most LINs”.