In the video below, Team Slippery Rock explains their strategy for achieving the best solution for the 10,000-city Traveling Salesman problem. Like most of the teams, they’ll be using multiple approaches simultaneously in order to find which of the many algorithms available to them work best on the data set they receive.

*This video was recorded during the record-breaking snowfall and cold snap here in Salt Lake City, meaning that the temperature in the hall was approaching the freezing point in many locations. This explains a bit of the shaky camera work. (Incompetence explains the rest of it.) 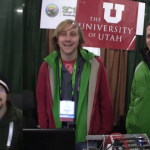 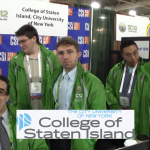 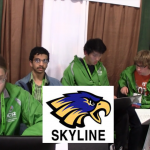 As the home team, there’s a lot of pressure on Utah to win. Well, maybe not – but I’m trying to create some for my own amusement. They agreed that there is some pressure but say that they’re resigned to living with the fear and using it motivate them to greater heights… or something like that. They’re going to attack the 10,000-city Traveling Salesman problem using multiple algorithms too, but will be ready to change on the fly if one set of algorithms proves more successful.

The team also has some of the best visual aids to explain both the problem and their strategy for tackling it; I’ll include those in an upcoming article. The Utes look like one of the stronger teams in the field – but what the hell do I know? In my real-life business travels, I’ve been stumped by seven- and eight-city trips – usually forgetting what my rental car looks like and being forced to wander through parking lots pressing the alarm button on the key fob until I spot my car.

Team Staten Island takes us through the LittleFe system and discusses their configuration and capabilities. These systems are small, but like Africanized honeybees or even squirrels, they pack quite a punch when they’re teamed up to attack a single objective. These guys have their own LittleFe at their home base in New York and are obviously familiar with both the system and the Traveling Salesman problem.

As previously explained, this problem is going to include 10,000 cities, meaning that a brute force approach would require a system to consider 7^150 potential permutations. That’s enough to challenge even the largest of supercomputers. Hmm… how great a challenge would that truly be to a petaflop-scale system? Anyone have an idea? Or do I have to find all of this stuff out on my own?

Here we meet the first high school team to ever compete in the Student Cluster Competition – the team from hometown Skyline High School. They’re a bit quiet at first, but over time, I was able to draw them out a little bit. I had to challenge their age claims; to me, they look like college-age kids. But the one who looked the oldest (and was actually the youngest) pulled out his driver’s license in an attempt to prove his age.

We went on to discuss their unique approach to the Traveling Salesman problem. Rather than rely on commonly available algorithms, they’ve decided to go their own way with a mostly homegrown solution. Moreover, they’re not going to be using multiple approaches at the same time – they’re just going to plow ahead with their own tool and modify it as needed along the way. It’s a bold move that could either pay off in a big way or leave them trailing behind the pack.

They’re a confident bunch and work well together as a team, and that counts for a lot in these types of competitions. We’ll see what happens. But I still think these guys are all in their mid-20s, regardless of whatever documents they flash at me…