This year’s ISC’16 Student Cluster Competition boasts the most diverse set of hardware in the near 10-year history of student cluster competitions. Student teams are running three different system architectures (x86, ARM, and Power) in both traditional and hybrid (hardware accelerated) forms.

The configurations of these systems are all over the map, as is typical in these competitions. CPU core counts range from 56 on the low end to more than 800 for the ARM teams. Let’s take a closer look at the team configs… 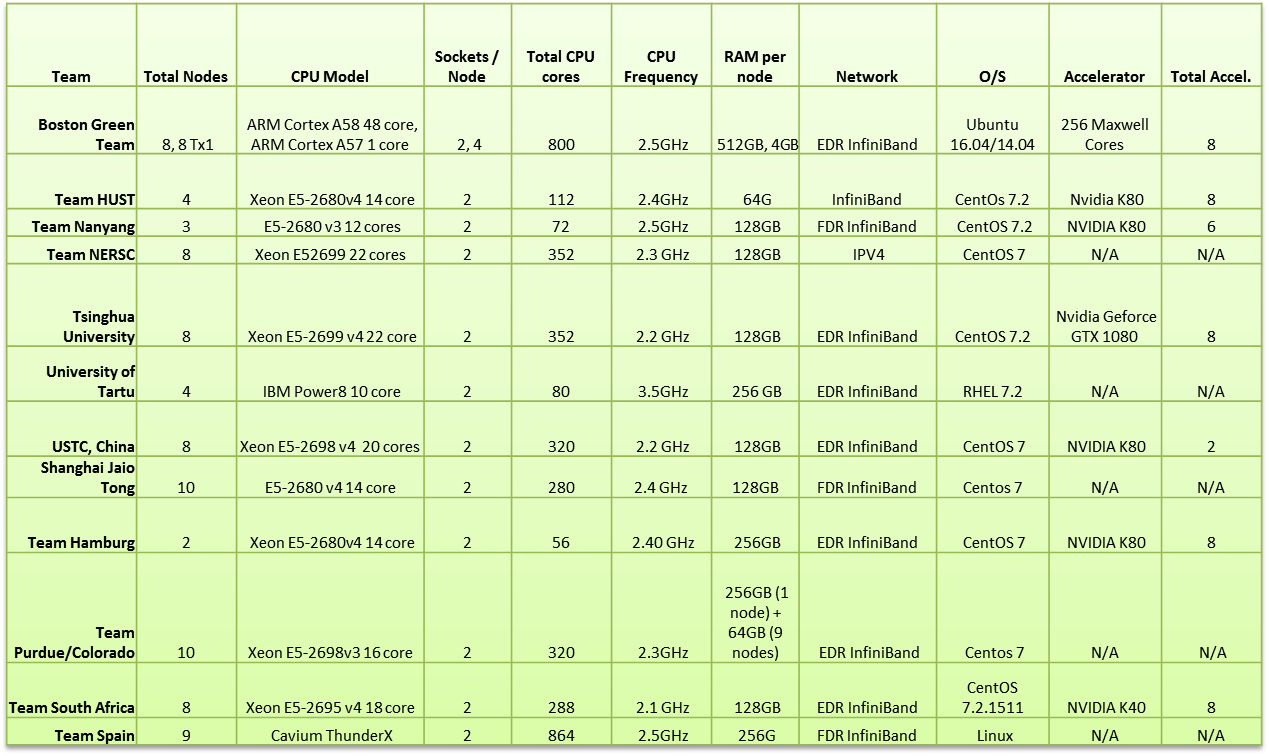 Boston Green Team: Always a team that can be counted on to try something new, Team Chowder didn’t disappoint . They’re rocking (or trying to rock) a near-800 core Cavium-based ARM cluster. They’ve added on a brace (eight) of NVIDIA Jetsons to add a bit of number-crunching heft. The team was hoping to use full-sized NVIDIA K80 GPUs in this configuration, but the firmware to allow this has yet to be released.

Team HUST: The kids from Huazhong University of Science and Technology are driving a mid-sized cluster provided by team sponsor Inspur. It’s a slimmed -own version of the box they used to win the ASC16 competition and get their ticket punched for the ISC’16 championship round. Rather than the eight Xeon nodes with 160 cores and six NVIDIA K80 accelerators they used in China, they’re running four nodes with 112 cores and eight K80 GPUs. So while they have fewer CPU cores, they’ve added more GPU punch – which should certainly make them a viable competitor for at least the Highest LINPACK award.

Team Nanyang: This team has also slimmed down their configuration a touch from what they used at the China competition last April. In China they had a four-node, 80-core, eight-K80 LINPACK monster; but here in Frankfurt they’ve gone to a three-node, 72-core system with six K80 GPUs. From a power consumption standpoint, they’ll be able to drive this harder while not going over the 3,000 watt power limit.

Team NERSC: Sponsored by the US National Energy Research Scientific Computing Center, this is the first all-female team to compete at ISC and only the third all-woman team in cluster competition history. They’re running top tier gear provided by Cray, configured with eight nodes and 352 Xeon CPU cores. This puts them into the larger cluster size, at least when judged against other Xeon competitors.

Team Tsinghua: This team will be familiar to even the most casual follower of student cluster competitions. In typical form, the team has brought a hybrid system that is designed to compete for the overall championship trophy. Their Xeon-based 352 core system is buttressed by accelerators, but not the typical K80s or K40s that most other teams are sporting. Instead, they opted for NVIDIA 1080 Titan GTX GPUs. The team went this way because there’s more bang for the watt with the 1080s vs the K80s in single precision, plus the cards were easier for them to acquire. Will this bet pay off? We’ll find out at the awards ceremony later on today. (Which will be live streamed at 5:15 pm Frankfurt time here.)

Team Estonia: The kids from University of Tartu have added another architectural spice to our student cluster competition stew. They’re pushing a four-node Power8-based system provided by IBM. This is the first time a Power-based system has been used in a cluster competition. The system has a grand total of 80 Power8 cores running at 3.5GHz, plus a terabyte of memory. The system originally also sported four NVIDIA K80 GPUs, but the team disabled them to conserve power and also because they weren’t sure the GPUs would help on the majority of applications this year.

Team USTC: This team is driving an eight-node, 320-core system provided by team sponsor Huawei. It’s a hybrid cluster, but only barely, with two NVIDIA K80 accelerators. This is the third time the team has competed at ISC, and they’ve always finished just barely out of the money. This could be the year they break through the silicon ceiling and join the elite tier of teams.

Team Shanghai: This isn’t the first cluster rodeo for the kids from Shanghai Jiao Tong University. They finished second in the ASC16 cluster competition, which qualified them for the ISC’16 finals in Frankfurt. They’re driving a ten-node, 280-core traditional cluster with no accelerators.

Team Hamburg: As the only team from home country Germany, Team Hamburg has the weight of an entire country on its shoulders. While the team has the smallest cluster – only two nodes and 56 CPU cores – the eight NVIDIA K80s jammed into their chassis gives them quite a bit of punch. This system probably doesn’t have enough oomph (technical term) to allow them to compete for the overall championship, but it does give them a good shot at taking home the LINPACK trophy.

Team Purdue/Colorado: A Boilermaker and a Buffalo walk into a bar, the Boilermaker tells the bartender… hmm, I thought I had something there, but I couldn’t bring it home. Anyway, this team is a combined effort of two cluster competition veterans: Purdue University and University of Colorado (Boulder). The team, sponsored by HPE, is driving a traditional ten-node cluster with 320 cores, pretty standard stuff for these teams.

Team South Africa: The kids from South Africa are hoping to add a third ISC Grand Championship award to their trophy case back home in Cape Town. This isn’t a team that varies their hardware much; their machine this year is pretty close to what they used last year, with eight nodes, 288 cores, and eight NVIDIA K40 cards. The South Africans like the K40 because it uses less power than the K80 but still provides a substantial processing boost. As always, Dell is sponsoring the team and provided them with a trip to Austin to get extra HPC training and some Texas BBQ.

Team Spain: Last year, Team Spain was the first team to bring an ARM-based cluster to a major cluster competition. They’ve more than doubled down this year, hauling in a liquid cooled, 864-core Cavium ThunderX ARM-based behemoth. This certainly gives them a lot of processing capacity, but will it yield the processing speed they need to compete with their Xeon-based rivals? Like Team Boston, Team Spain was also hoping to be able to run NVIDIA K80 or K40 GPUs on their cluster to give them the number-crunching capability necessary to top the competition. However, the firmware that will allow NVIDIA GPUs to work with Cavium processors hasn’t been released yet, which is unfortunate for the ARM-based teams.

Our coverage of the ISC’16 Student Cluster Competition will continue with team interviews, results, and analysis. Stay tuned for more. In addition, if you’re around a computer today/tonight/whenever, check out the live ISC’16 competition results ceremony. It starts at 15:15 UCT (16.15 UK time, 17.15 Central European) and will stream here.