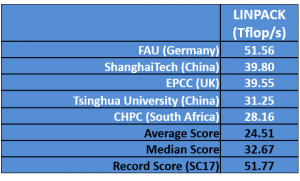 The team turned in a score of 51.56 Tflop/s, which is only .21 less than the student world record LINPACK score of 51.77. According to observers, FAU almost completed a world record run, but the ambient temperature in the hall caused the machine to thermal out before the run could complete. We’ve now entered an era where the temperature in the convention center is having an impact on scores.

Looking at the chart, you’ll see that FAU left everyone else in the dust. ShanghaiTech was a surprise second place finisher, which is pretty good for a team that is only competing in their second competition. EPCC, a former LINPACK record holder, nabbed a close third place finish. Rivals Tsinghua and CHPC grabbed fourth and fifth places finishes respectively.

Historically, we can see just how close FAU was to setting the world record LINPACK for student competitions. Just .41% separated FAU from the glory that 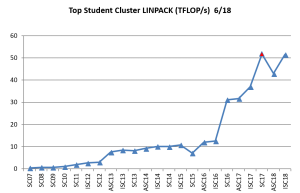 Even though FAU didn’t get the record, the team can feel good about netting the LINPACK prize, plus becoming only the second team in cluster competition history to capture consecutive LINPACK Awards – only NUDT in 2012 has achieved that milestone. Great job, FAU!