But what you don’t know is how they won and just how close the final scores were…so here’s the rest of the story.

On the first day, Beihang University came off the top rope and laid a big flying elbow on the rest of the field by posting a 50.21 teraflops Linpack score. The next closest team, cluster competition newcomer Jinan U, was well behind Team Beihang, notching a score of 39.68. Beihang more than doubled the field average result of 24.28, putting them firmly in the driver’s seat after the first benchmark. NTHU was third in Linpack, giving them some points and keeping them in the race.

NTHU came roaring back with a near record-breaking score of 2004.96 gigaflops on the HPCG benchmark — grabbing all 18 points for the first-place finish. Beihang shared second with SUSTech, which at this point in the competition, was enough to keep Beihang virtually tied with NTHU for first place. Traditional student cluster powerhouse Tsinghua kept themselves in the game by taking fourth on both Linpack and HPCG. 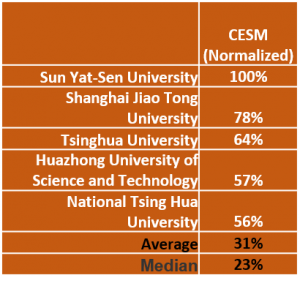 Coming at the end of day one, CESM was a real game changer. This application, written in the early 1980’s, almost drove teams insane with compiler errors, hot spots, and inability to parallelize with anything less than an entire rewrite or alien intervention. It was absolutely the most difficult application in the ASC19.

From a scoring standpoint, CESM was a nightmare application that wrecked some dreams of student cluster competition glory. However, a few teams were able to tame CESM and ride it, giving them a vehicle to take them from mid-pack player to real contender.

Sun Yat-Sen took down the rest of the field by a wide margin on CESM, with Shanghai Jaio Tong pulling down second place. Tsinghua strengthened their championship hopes by grabbing third place while NTHU had to make do with a distant fourth. Beihang stumbled on CESM and it nearly took them out of the race for the top slot.

Going into day two, there were four teams vying for the lead:  NTHU, Tsinghua, Sun Yat-Sen, and Beihang. These teams were in control of their own destinies. Other teams still had a chance for an upset victory, but they had to rely on the top teams making mistakes or being off their game. 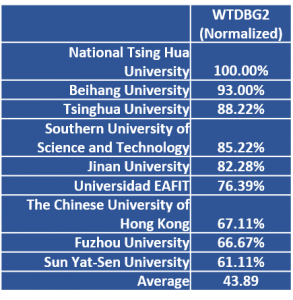 This was a very busy day for the competitors. Their first task was to get genome assembler WTDBG2 to scale to more than one node – which had been problematic for most teams during the warm ups.

NTHU put the lumber to the ball and hit WTDGB2 out of the park with a perfect 100 percent score. Beihang stayed in contention with a score of 93 percent and Tsinghua swiped a third-place finish from SUSTech by a mere three percentage points. At this point, NTHU has a great chance to run the table for the championship, but Tsinghua was still lurking in second place, ready to pounce.

Faces SR was the next application up for the student teams. This is the app where the students are presented with blurred faces and have to use AI and other tools to get the highest resolution possible in the shortest amount of time.

Team Beihang put on a masterful performance, pounding Faces SR for a perfect score of 100 percent. Jinan took second place, with NTHU and Tsinghua third and fourth respectively. According to the official referee score cards, NTHU was still clinging to their first-place position, but Tsinghua was less than a point behind them with Sun Yat-Sen and Beihang closing in. 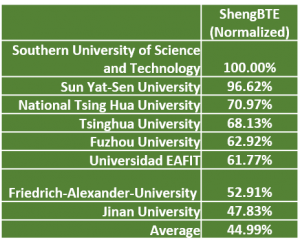 ShengBTE, an application used for solving the hugely popular Boltzmann Transport Equation, was the mystery app at ASC19. SUSTech threw down a big 100 percent score and vaulted themselves up a few spots while Sun Yat-Sen mounted a valiant charge with their score of 96.6 percent — but would it be enough to get them on the podium? NTHU and Tsinghua remained deadlocked with their scores of 70.97 percent and 68.13 percent.

With only the interview to go, NTHU was holding onto a vanishingly thin margin over Tsinghua, with Sun Yat-Sen and Beihang still banging on the door.

The ASC19 interview room is a scary place. Students are confronted by genuine HPC experts, including some of the biggest names in the game. The teams have to put on a short presentation and then brace themselves for the questioning that is sure to follow. 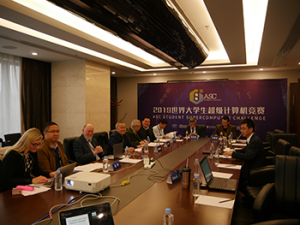 Peking University did an outstanding job on the interview with a perfect 100 percent score. Tsinghua also nailed the interview with a 100 – was this enough for them to catch up with and surpass NTHU? Sun Yat-Sen continued their furious comeback with a 96 percent and Team Beihang kept it close with their score of 84. NTHU stumbled a bit in the interview, uncharacteristically taking ninth place with a score of 83 percent. Would this spell disaster for the kids from Taiwan? Could they possibly still hold onto their slim lead?

Yes, they could. By the slenderest of margins, NTHU took home the championship, topping arch-rival Tsinghua by just over a percentage point. Sun Yat-Sen University took home the Bronze Medal with their overall score of 70.99 percent. Beihang took fourth and newcomer Jinan turned in a fifth-place final score. 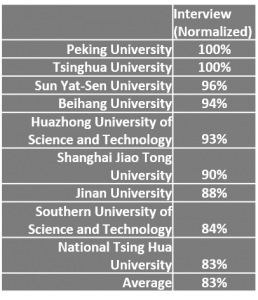 NTHU was one of the very first teams to participate in a Student Cluster Competition. They can trace their lineage all the way back to 2007, when the first competition was held in Reno. This marks the 15th competition for NTHU and gives them their first Gold medal since 2011. The team has won a total of three Gold medals, plus four Highest LINPACK prizes.

With their first-place finish, NTHU gets their ticket punched for the ISC19 finals which will take place in Frankfurt, Germany, next month. Tsinghua was already invited to this important event, so they receive a bye into the ISC competition. This means that third-place finisher Sun Yat-Sen will take the second ISC slot reserved for the ASC winners and make the trip to Germany.

Sun Yat-Sen University took home the prestigious E-Prize for their outstanding performance on the troublesome CESM application. As we saw above, Sun Yat-Sen topped the 20 team field by a wide margin on this application.

So What Have We Learned? 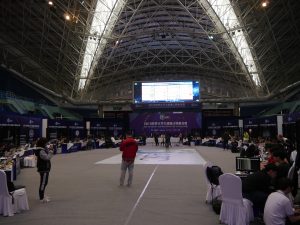 There are several takeaways from this ASC19 cluster competition event. The first is that it is totally AWESOME to hold a cluster competition in a real stadium. There’s plenty of room, great heat dispersion, and massive scoreboards for the power meters.

The second thing we’ve learned is that CESM is a either a horrible application (if you’re a student) or a great test of student optimizing abilities (if you’re a judge).

The results from ASC19 also reinforce something that I’ve been telling every cluster competition team:  you don’t have to win every benchmark and application to become the champion – but you do have to turn in a result for every application. 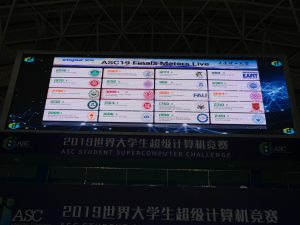 NTHU won the HPCG benchmark and WTDBG2 application outright, but only finished in the top handful of teams on the other tasks. Tsinghua, the second-place winner, didn’t win any of the benchmarks or tasks, but they turned in competitive results on every challenge. That’s the key to being competitive in these events – consistent performance.

I would be remiss if I didn’t recognize Inspur for sponsoring yet again another fantastic ASC Student Cluster Competition. Inspur is the only vendor to put on an entire competition on their own, providing all of the equipment, facilities, translators, and other support for 20 teams — which is probably close to 150 people. A sincere thank you to Inspur, plus the legion of volunteers from Dalian University, for putting on the competition, making it a great experience for the student teams and easy for me to cover.