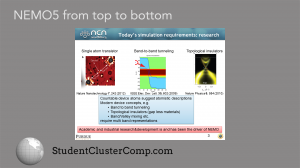 It’s crunch time for the students who will be competing at the SC13 Student Cluster Competition in Denver. The eleven university teams – plus one group of plucky high schoolers – are in cram mode now, trying to figure out how to wring every last bit of performance out of their gear.

All teams will be running the same HPC benchmarks and scientific applications this year, whether they’re in the Standard Track (any hardware, can’t exceed 25 amp/120 volt power cap) or the Commodity Track (hardware can’t exceed a $2,500 purchase price).

The applications, of course, play a critical role in the competition. If the students don’t understand the apps or how to get them to run with varied data sets, then they simply won’t be successful. With this in mind, the teams have worked for months to understand the apps and how they work, and make them run like scorched weasels on their various clusters.

The competition begins on the morning of Monday, November 18 when the teams run the HPCC benchmark. This shouldn’t be much of a hurdle; it’s a well-known workload, and there isn’t any way for the organizers to throw them a curveball. Students will also run a separate HPL (LINPACK), submitting their best score for the Highest LINPACK award.

Monday evening marks the start of the SCC marathon. This is when the teams get access to the data sets they’ll be using with the HPC applications that make up the bulk of the competition. They have from Monday evening until late Wednesday afternoon to run all of the workloads and submit their results to the application judges.

To give the students a last-minute helping hand, I’ve interviewed some experts on the applications they’ll be facing at SC13. The goal is to help the the teams better understand how each app works and how to approach tuning. Here are the apps on the SCC menu this time around:

WRF:  A weather prediction modeling package that is used in both research and daily weather forecasting. WRF is highly parallelized and scalable, and has been used in a number of previous student cluster competitions. There are packages available for systems using GPU accelerators and Phi co-processors.

I recorded a webcast with Dr. Jordan Powers and David Gill from the NCAR (National Center for Atmospheric Research.) In the vid, they talk about WRF and how they’d approach performance tuning in the context of the student cluster competition.

NEMO5:  A highly useful application that is used in both academic and industrial R&D to simulate nanoscale devices down to the atom. NEMO5 is also a highly parallel and scalable app that can now span as many as 100,000 cores.

Give a listen to this new webcast with Dr. Jim Fonseca, a key developer of NEMO5. We take a deep dive into NEMO5: what it does, how it works, and what students need to consider when trying to maximize performance. Jim gives out a number of highly useful tips for students, including how to profile the code and where to find testing datasets.

GraphLab:  An application that was originally aimed at fostering parallel processing for machine learning algorithms, but is now being used in a wide variety of data mining and Big Data-like tasks. GraphLab is used for tasks like computing page rankings on the web or figuring out what list of products to recommend to new customers.

The Mystery Application:  Just what it says: a mystery. It’s a knuckleball straight from the organizers to the students, designed to see how quickly they can think on their feet and apply their expertise to get up and running on an app they aren’t prepared for.

Students will be scored on how well their system performs on these applications and/or the accuracy of their solutions. The teams will also be interviewed by HPC expert judges who will score them on their understanding of the applications, their systems, and key HPC concepts.

Teams with the best combined scores will earn the prestigious title of Overall Champion for their respective competition track (Standard or Commodity). Awards will also be given out for Highest LINPACK score in the Standard Track and highest Flops-Per-Dollar in the Commodity Track.