The ISC’14 Student Cluster Competition closed out last week in Leipzig, and damn, what a ride! It was an outstanding competition with story lines straight from Hollywood. If John Hughes were still making movies, he’d be writing the script and shopping it around the big studios right now.

Let’s start at the beginning, with a couple of pre-competition webcasts that set the stage.

The first webcast (above) features a conversation with Gilad Shainer, Chair of the HPC Advisory Council and main force behind  the ISC version of this event. We cover a lot of ground in our conversation, starting with of why Gilad worked so hard to establish the ISC competition and then a more specific discussion ISC’14 highlights.

A New Way to Enter?

One of the questions I hear the most when I’m covering these cluster competitions (aside from, “So, just how fat are you?”) is, “How can we get in on this?”

Typically, this comes from a university professor who’d like to get his students involved. But I also hear this from people working at research organizations and national labs, and folks who work in the industry who’d like to sponsor their favorite university in a cluster battle.

Until now, the answer has been, “Get a student team together, submit an application to one of the three major competitions, and hope you make the cut.”

In this webcast, Gilad announces a new path into the cluster competition final at ISC: the Regional Competition option. If a geographic region (country, state, or even city) holds a regional student cluster competition with a reasonably large level of participation (say 6 or more teams), the winning team from that competition will be guaranteed a slot at the next ISC in Germany.

I’ve already heard rumblings about potential regional competitions in a couple of different countries, and even one for the U.S. Big Ten college sports conference (which, strangely enough, actually has 14 member institutions).

In this webcast, I spend some time with Brian Sparks talking about the ISC’14 field. Brian is a Director with the HPC Advisory Council and has been deeply involved with the ISC cluster competition. The beginning of the call is used to familiarize viewers with the competition, the schedule, and the applications that the student teams will be facing in Leipzig. 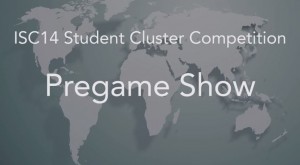 Starting at about the 8:30 mark, we discuss each of the eleven teams from around the globe – every continent except Australia and Antarctica was represented in Leipzig. We break down their games, discuss their training regimes, and evaluate their strengths and weaknesses.

We also try to stir up some team dissension. For example: the University of Hamburg squad was all smiles in their individual pictures, but no smiles in their group picture. Is this meaningful? Does it reveal internal team friction? We figure it does.

Finally, we reveal our predictions for the Overall Champion, Highest LINPACK, and Fan Favorite awards. Brian turned out to be completely wrong. My prediction on LINPACK was wrong, but I correctly picked South Africa as the Overall Champion – which would have made me a bundle in the betting pool.