Early money makes Germany’s Karlsruhe Institute of Technology (KIT) a heavy favorite to win both the LINPACK and Overall competitions at next week’s Student Cluster Challenge in Hamburg, Germany. The competition, also known as “Hell on the Elbe: Stüdent Klüster Kamph” will take place during the annual ISC’12 event. It’s sponsored by the ISC, the HPC Advisory Council, and corporate sponsor Airbus. (Team breakdowns here.) 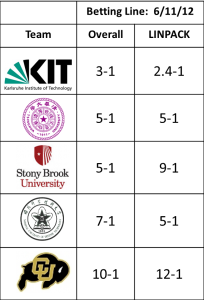 KIT pickers look to be almost exclusively from Germany or Europe, and they’re not spreading their bets around – they’re putting all of their virtual money on KIT to win. This makes them a 2.4-1 favorite for the LINPACK portion of the competition and a slightly worse 3-1 fave to win the overall crown (Krown?) Because the KIT team is competing for the first time, there isn’t any track record to help inform bettors, and I’m not hearing any chatter from the usual cluster competition touts.

China’s Tsinghua University hits the board at second, with 5-1 odds in both competition categories. Field bettors placed somewhat heavier bets on this Chinese team – maybe based on the fact that they beat out archrival NUDT to secure the number one slot on Team China. We don’t know a whole lot about the Tsinghua team or university, but I’ve recently learned that their school flowers are the Lilac and the Redbud, their school colors are purple and white, and their slogan is “Self-discipline and Social Commitment.” Not sure what bearing this has on their performance in Klüster Kamph ’12, but if I’m going to write a scratch sheet, I want to be thorough.

The Stony Brook Seawolf team comes in as a 5-1 favorite to win the overall competition but 9-1 to win LINPACK. The Seawolves have participated in two earlier SC-sponsored cluster competitions, winning once but finishing in the middle of the pack at their 2010 outing in New Orleans. In the past, this has been a quirky team. They were sponsored by Cray last time, and were one of the first teams to bring GPUs to the party – but we don’t know who’s sponsoring them in Hamburg or what they’ll be packing hardware-wise.

China’s number two team, the National University of Defense Technology, isn’t getting much respect from early bettors. On the board at 7-1 and 5-1, they’re a team that definitely has the potential to take it all. At the 2011 SC competition in Seattle, they were just barely edged out by Taiwan’s Tsinghua University. Coincidentally, the team that beat them during the intra-China Hunger Games-like playoff round is also named Tsinghua – the one in Beijing. By now, NUDT has to be wondering what they have to do to get past the Tsinghuas. They’re hungry for sure.

The long shot here, the University of Colorado team, is also the most experienced by far. This will be the school’s sixth trip to a cluster competition. While they’ve picked up a lot of frequent flyer miles, they have yet to win the overall championship or the LINPACK award. They did snare the Fan Favorite award in the New Orleans 2010 tourney, but they’re looking for more out of this Hamburg trip.

We still have bets streaming in. If you’d like to lay your (virtual) money down, give this link to the betting site a click. I’ll update the odds in another article later this week.